A Sticky Plant with a Clever Trick 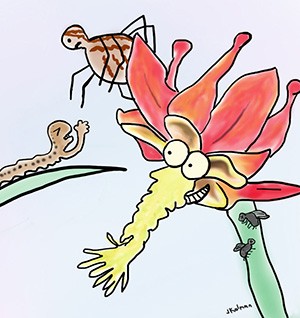 A garden book might note a columbine’s delicate leaves and gracefully nodding flowers, but at least one species, Aquilegia eximia, has been shown to have a trick or two up its sepal.

Eric LoPresti of the University of California, Davis has studied why this sticky columbine, endemic to western California, tends to find itself covered in dead insects. It does not consume the carrion as some plants do, but LoPresti’s findings indicate it may be using the bugs as bait to lure the enemies of its own main threat, the Heliothis phloxiphaga caterpillar. Assassin bugs, crab spiders, and other predators come for the carrion but stay for the tasty caterpillars and caterpillar eggs.

LoPresti’s team prepared petri dishes with and without bits of A. eximia. They then covered all the dishes in mesh and a sticky substance and placed them in a meadow the plant naturally inhabits. The dishes with plant material trapped about 21% more bugs than plant-free dishes, indicating that the plants possess an insect attractant.

Separately, the team removed dead insects from some wild plants but left them on others. Plants that kept their little bug morgues showed less damage and were visited by almost ¾ more predators of caterpillars. Bugless plants were 121% more likely to sustain damage that would affect their reproduction.

Columbine, meaning dove, is so called because its flower resembles, to some, a cluster of doves. The genus name Aquilegia refers to the flower’s resemblance to the talons of an eagle. Whether you see a symbol of peace or a raptor, this species does seem to employ the idea that the enemy of its enemy is its friend.