A Pungent Play in the Game of Cat and Mouse 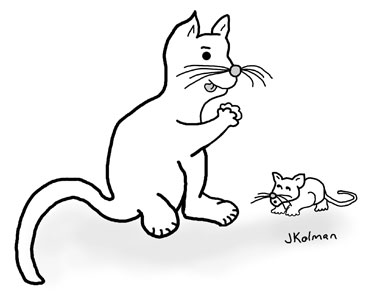 It was discovered a few years ago that the parasite Toxoplasma gondii has the diabolical effect of short circuiting the fear of cats in the brains of mice, making them easy picking. Researchers at the A.N. Severtov Institute of Ecology and Evolution in Moscow now show that a more readily abundant substance has a similar effect: the cats’ own urine.

Mice normally exhibit fear and a measurable increase in stress hormones when they detect a compound in cat urine called felinine. A team led by Dr. Vera Voznessenskaya showed that mice exposed to the odor at a critical developmental age of about one month seemed to become inured to the odor. The mice exposed in youth ceased to exhibit outward signs of fear — most notably the tendency to flee — when presented with the scent later in life. However, their internal production of stress chemicals actually became more pronounced than in mice with no previous experience with the substance.

It’s as though the mice simply learn to deal with having a deadly nemesis on the premises. It is a potential advantage for mice to learn to subvert their instincts in this case, because mice scrounge food from people, and where there are cats, so there are people.

Whether devious felines know they can lure vulnerable young mice by plying their pee is another question.

The findings were presented at the Society of Experimental Biology meeting in Prague.