Chances are you drank a healthy dose of caffeine this morning. Upon entering your blood stream, that caffeine bound to adenosine receptors in your brain, keeping it awake. Like joyful little sparklers, your nerve cells started firing in rapid succession. Your pupils dilated, your heart beat quickened much the same as it does when you’re in love. And there it was, that strange liquid magic, your morning boost.

The fate of substances like caffeine and drugs from the moment they enter your body is what pharmacokinetics is all about. But, for many years, a rather insistent, expensive problem has been plaguing pharmacology — it’s quite tricky to understand the pharmacokinetics of new drugs without giving them to someone. As far back as the 19th century, relentless chemists labored for years to synthesize new potential medicines, often using frogs as test subjects (Kodzius et al. 2017). Over 200 years of medical advances later, not much has changed in the way of establishing precise human models that avoid the use of actual humans (or animals). Pharma companies today can spend more than $2 billion developing just one drug, much of it spent in early discovery and preclinical phases. Yet, efforts often fail to accurately predict how the human body will handle the proverbial substance.

Organs-on-chips, the specialty of Dr. Dan Tagle at the NIH, could be the answer. Dr. Tagle joined Dr. Laura Moriarty on her podcast, Brilliant Science, to talk all about them (linked at the end).

Complete with a self-explanatory name, organ-on-a-chip technology is a relatively simple concept. A microfluidic polymer chip houses either cells from, or partially grown parts of, a human organ in vitro. Making headlines as recently as 2010, the very first organ-on-a-chip was the human lung (Huh et al. 2010). Last year, start-ups like Emulate began to sell ready-made lung-chips, liver-chips, and even intestine-chips (Kwon 2017). The most immediate hope for such devices is that they’ll circumvent animal testing and provide researchers with human models faster. 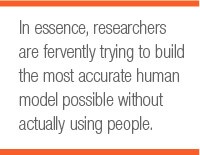 But, as they usually do, research efforts have continued to explore the possibilities of this new technique. In his interview, Dr. Tagle emphasizes that cellular renderings of singular organs are just the beginning. Partial organs — including beating bits of hearts — can be derived from the cells of an actual patient, eliminating the need to guess how that patient will handle a new drug. Due to their microfluidic nature, multiple chips can even be linked together to create, if you will, a person-on-a-chip. The utility of this approach, Tagle explains, is “when we’re assessing a particular drug candidate…most of the drugs actually get metabolized in the liver…But sometimes, it’s the metabolite that might actually pose some toxicity problems.” The byproducts created by a drug passing through one organ (say, the liver) would affect another (perhaps the kidneys) differently than direct drug-organ interactions. In essence, researchers are fervently trying to build the most accurate human model possible without actually using people.

Perhaps most mind-blowing in the realm of this technology is that Dr. Tagle is sending it to space. In late November, Dr. Tagle’s team hoped to send the first organs-on-chips-in-space aboard a SpaceX Falcon 9. But, the November 27 launch was delayed due to inclement weather. They hope to launch in early 2019. The goal with this project, Tagle explains, is not only to develop innovative ways to transport massive, complicated experiments within the volume of a shoebox aboard a rocket, but to track down the cause of a curious side effect — apparent accelerated aging during space flight. Dr. Tagle shares that, “when astronauts would go up in space…they would undergo immunosenescence, they would have muscle wasting, they would have cardio myopathy or weakness of the heart muscle” all of which are associated with aging. Yet, the long-term NASA twins study showed a reverse aging effect in the chromosomes of astronaut Scott Kelly (Edwards et al. 2018). Which leaves many researchers like Dr. Tagle curious as to just where those organ-level aging effects are coming from and if they could be mitigated.

Even while hardworking scientists explore them today, the key to knowing if space-based treatments or new pills and vaccines will actually work once they are translated into human subjects may depend on novel technologies like organs-on-chips. But, we are, as ever, in rapid pursuit of what lies at the core of science: to firmly establish our boundaries. And to boldly push them.

Biomarkers for the Brain

One for All — The Universal qPCR Reagent