Nuvia S media is a high-capacity strong cation exchanger (CEX) developed to operate over a range of experimental conditions, allowing scientists to scale up from laboratory- to process-scale more quickly and easily. Nuvia S is based on a surface-modified large pore hydrophilic matrix produced by polymerization of water-soluble, hydrophilic acylamido and vinylic monomers. Such an approach to design offers Nuvia S media excellent dynamic binding performance (100–170 mg/ml) for target biomolecules and low backpressure at the high flow-rates (150–600 cm/hr) used in biomolecule purification. These properties, therefore, give Nuvia S media the robustness and productivity required for initial capture of monoclonal antibody (mAb) from cell culture harvest as well as the impurity clearance capability needed for the purification of mAbs and other protein therapeutics.

Tolerance to Variations in Load Composition

mAbs are generally produced by mammalian expression cultures at physiological pH. A typical mAb harvest also contains a substantial amount of sodium chloride, which requires pH adjustment and inline dilution before loading onto a cation exchange column. The tolerance of load variation by Nuvia S media has been studied in the conductivity range of 4–12 mS/cm at pH 5.0, which corresponds to 15–105 mM of sodium chloride in solution. The 5% and 10% breakthrough dynamic binding capacities (DBC) of prepurified monoclonal antibody mAb1 varied only slightly — from 140 to 180 mg/ml at 300 cm/hr (Figure 1). Since the pI value of an antibody as well as the pH and conductivity of the product pool determine the strength of its interaction with the ligands on CEX media, users are advised to examine the dynamic binding capacity of a mAb in expression harvest at multiple pH-conductivity combinations using design of experiments (DoE) during process development and optimization. 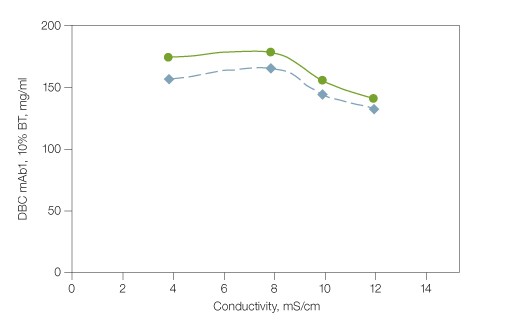 mAb1 tends to aggregate during the acidic elution step of Protein A affinity capture chromatography. A salt-step elution method was developed to recover monomeric mAb1 while retaining aggregates on the Nuvia S column until stripping with 1 N NaOH (Figure 2). The overall yield of monomeric mAb1 in such chromatographic preparation was 93%, and the aggregate contamination level was effectively reduced from 13.8% in the load to 1% in the eluate (Figure 2, inset). 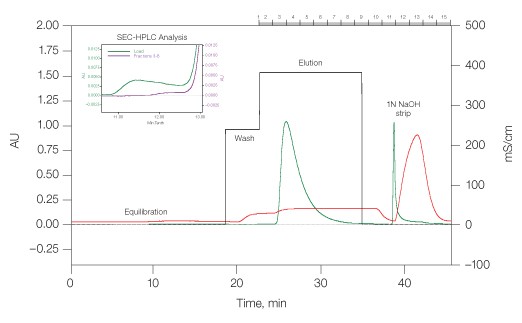 Increasing productivity and reducing costs continue to be the driving forces in process development. Recent advances in upstream processes have dramatically improved the efficiency of cell cultures. However, prolonged growth or cultivation and high concentration of mAbs at harvest may also lead to product degradation and/or aggregation. Clearing these unwanted by-products remains one of the main challenges in downstream processing of therapeutic mAbs. Our data demonstrate that Nuvia S media is suitable for both capturing and polishing steps in the purification of mAbs over a wide range of operating conditions. Its high capacity and superb purification performance can significantly improve productivity by offering the robustness, capacity, and speed for processing large load volumes with smaller columns and less buffer consumption.
Tags:chromatography
Previous post

All cDNA Synthesis Kits Are Not Created Equal: RNase A Inhibition and Its Effect on qPCR Data