Crows Do Fear the Reaper 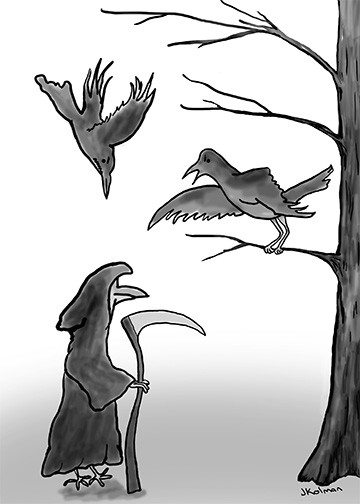 Crows have been shown to associate dead bodies of their own kind with danger, and are also known to remember the faces of individual humans who have threatened them.

A study by Kaeli Swift at the University of Washington now indicates the birds can combine these abilities in order to associate individual humans with dead crows and deem them threatening.

The study involved American crows (Corvis brachyrhynchos) in an urban setting. Swift conditioned crows to arrive at a certain location and time by feeding them treats. Then volunteers wearing realistic human masks arrived at the treat site along with taxidermy props from the collection in Swift’s lab: either a crow, a pigeon, a red-tailed hawk, or a hawk plus a crow.

The appearance of a dead pigeon provoked no reactions. But when volunteers held dead crows they received a display of defensive calls, mobbing, and sometimes dive-bombing from the crows that had shown up for treats. These crows would be joined by neighboring crows, with one instance of a 43-bird mob.

Of the threatening scenarios, the hawk plus dead crow created the severest alarm, based on Swift’s data on mob numbers and the amount of time crows took to collect treats after the threatening objects were removed.

The crows reacted to the first appearance of any volunteer accompanied by a predator or dead crow, and they displayed alarm responses when the same mask wearers entered the area without morbid props up to six weeks later.

The masks were used to control for possible effects of variable facial expressions — and presumably to keep the volunteers off the crows’ hit list.

Radiation Therapy for Skin Cancer: All Wrapped Up in a Bandage

The Cure for Cancer Could Come from…Malaria?