Alzheimer’s Disease: A Smoking Gun with No Suspect

“Insanity is doing the same thing over and over again and expecting a different result.” It is not exactly clear who coined that phrase, but anyone frustrated with Alzheimer’s disease research in the last 30 years certainly could have.

For the past three decades, beta-amyloid has been the assumed culprit of Alzheimer’s disease (AD). Consequently, a significant amount of research and industry resources have been deployed to understanding how it causes the disease, which has reached epidemic proportions (Alzheimer’s Association).

Beta-amyloid is a protein fragment that builds up in the brains of AD patients creating sticky clumps of plaque that disrupt communication between brain cells and eventually kills them.

The association between a patient with dementia and the buildup of amyloid plaques in the brain was first described by Dr. Alois Alzheimer in 1906. However, it wasn’t until 1984 that beta-amyloid was considered a diagnostic marker and target for AD treatment due to the work of Dr. George Glenner at University of California San Diego. Dr. Glenner created a brain bank to study the diseased brains of patients who were suspected to have died from AD. After discovering beta-amyloid deposits in over 90% of diseased brains, he characterized the protein as “a novel cerebrovascular amyloid protein,” responsible for the brain plaques in AD and a prime suspect in triggering nerve cell damage.

Based on Dr. Glenner’s findings, beta-amyloid became a natural focus of research on AD. Since then, the number of publications on this biomarker has skyrocketed (Figure 1).

Fig. 1. The number of research publications on the role of beta-amyloid in AD from 1967–2017. Chart courtesy of Amplion. 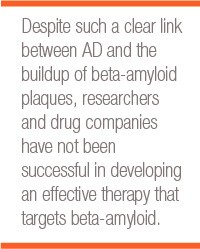 Proponents of the beta-amyloid hypothesis point to three main lines of evidence to support its association with AD:

A Contrarian View of the Beta-Amyloid Hypothesis

Despite such a clear link between AD and the buildup of beta-amyloid plaques, researchers and drug companies have not been successful in developing an effective therapy that targets beta-amyloid. Currently, a growing group of scientists are questioning the decades old theory as there have been more than 100 beta-amyloid targeted drugs that have failed to adequately treat AD. While it is possible that the studies evaluating these drugs were not well designed, or that the drugs were given too late in the AD process, some scientists think the beta-amyloid protein is not a true cause of AD.

Despite the mountain of failures, there are currently several studies targeting beta-amyloid. The results from these studies will either vindicate supporters of the beta-amyloid hypothesis or suggest that chasing this theory for the past 30 years was likely a big mistake. 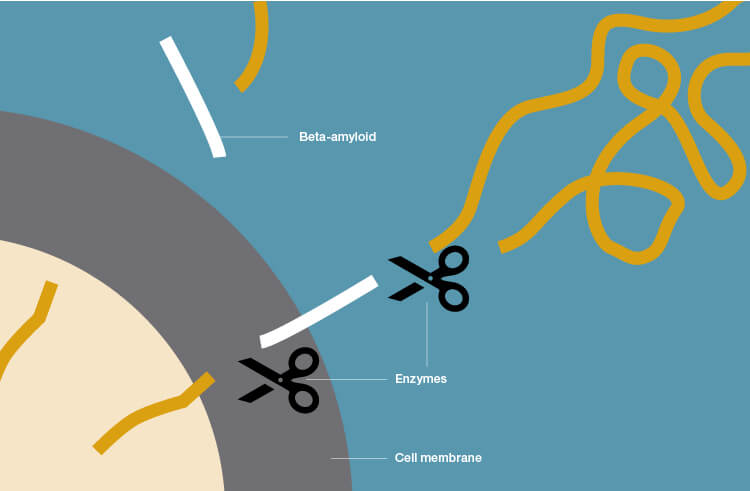 It wasn’t until 1984 that beta-amyloid was considered a diagnostic marker and target for Alzheimer’s disease treatment due to the work of George Glenner at University of California San Diego.

Beta-Amyloid as a Biomarker

Although treatments based on beta-amyloid have not yielded positive results, it is still used as a biomarker to confirm AD. Beta-amyloid is found in the cerebrospinal fluid (CSF), which surrounds the brain and spinal cord in a closed system encapsulated by a thin tissue membrane called the meninges. Removing CSF is an invasive procedure that is normally performed by inserting a needle into the spine (spinal tap), the brain (ventricular puncture), or on rare occasions, in the base of the back of the skull (cisternal puncture). 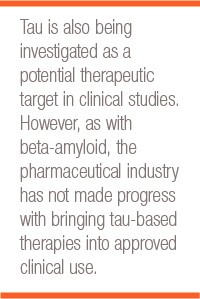 Beta-amyloid plaque deposits in the brain occur through cleavage of the large amyloid-precursor protein (APP) by secretases (enzymes that break down APP). When sampling the CSF in patients with AD, low levels of beta-amyloid are observed because it is being aggregated and deposited in the brain as plaques and is therefore unavailable to circulate freely in the CSF.

Another clinically accepted, CSF-based biomarker used to confirm AD is the tau protein. Tau is found in neuronal microtubules, which maintain the structure of the cell, and is elevated in the CSF of patients with AD. Tau proteins cause tangles that lodge themselves in the brain, thus preventing nutrients and other essential supplies from moving through the cell, resulting in cell death.

Tau is also being investigated as a potential therapeutic target in clinical studies. However, as with beta-amyloid, the pharmaceutical industry has not made progress with bringing tau-based therapies into approved clinical use. 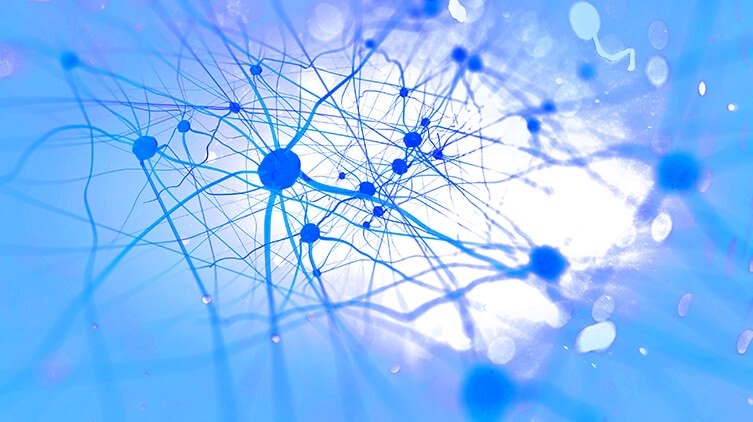 Magnetic resonance imaging (MRI) and positron emission tomography (PET) are also currently accepted methods used to clinically diagnose AD. MRI is used to detect structural changes in the brain due to AD. The loss of neurons, synapses, and other signs of compromised nerve cells can be detected with MRI, but it is often too late in the disease process to intervene (Sohma and Kokai 2016). PET reflects metabolic deficits due to synaptic dysfunction and possibly tau-mediated neuronal injury (Vemuri and Jack 2010).

The clinical standard of care for AD diagnosis relies on beta-amyloid, tau, MRI, and PET analyses. Although these are valid diagnostic tools, they are either very invasive or expensive. Furthermore, none of these methods can detect preclinical AD with the required sensitivity and specificity. Therefore, less invasive biomarkers may be a more accessible alternative.

Macrophage migration inhibitory factor (MIF) is a pro-inflammatory protein that can be measured in the blood and CSF. MIF plays a role in the body’s immune response and insulin regulation. It is involved in the response of brain glial cells to the build-up of abnormal proteins during AD. Scientists believe that inhibition of MIF activity caused by glycation (bonding of sugar to protein) could be the tipping point in AD progression.

Glycation reduces the effectiveness of MIF, which suggests a link between blood sugar levels and AD. Accordingly, AD is sometimes referred to as type 3 diabetes since patients with type 2 diabetes are twice as likely to develop AD as those without. Type 2 diabetes is caused by insulin resistance, which is the cell’s inability to use insulin to metabolize glucose. Insulin is needed to provide energy to the brain by facilitating the absorption of glucose by neurons, thus making them stronger. Without insulin, the brain will not get the glucose it needs to function properly. Over consumption of sugar requires beta cells to continuously produce insulin until they become resistant due to overuse. As a result, brain cells that are insulin resistant do not get the nutrients they require, ultimately leading to cell death and AD.

Biomarker profiling is another approach that has been applied in recent years to diagnose AD as well as other diseases. Single biomarker assays in AD are challenging to establish since they are multifactorial and complex. Profiling involves sampling a number of different markers and applying machine learning and sophisticated statistical models to discern which of the markers, when evaluated together, are predictive of AD in a patient. Using this type of model also allows researchers to explore blood-based markers, which are usually less specific than CSF markers since they are not localized to the brain. However, blood sampling is far less invasive than puncturing the spinal cord to obtain CSF and can be performed outside of clinical settings.

A novel and completely noninvasive sampling method that has been studied for its potential application in AD biomarker profiling is analysis of saliva. Developing accurate and sensitive biomarkers in saliva would be ideal for screening individuals at greatest risk of developing AD. A recent study tested the saliva of 29 adults with mild cognitive impairment, AD, or a control group of healthy individuals (Yilmaz et al. 2017). The researchers positively identified and accurately quantified 57 metabolites indicative of AD. Some of the observed variances in the biomarkers were significant, and the researchers were able to make predictions as to individuals with the highest risk of developing AD.

AD is a complex, multifactorial disease of the brain that may overlap with malfunctions of other organ systems. Developing valid biomarkers for diagnosis has been achieved, but there is still a need for less expensive and invasive diagnostic methods as well as the ability for earlier diagnosis in order to enhance prevention and treatment. Treatments currently approved only address symptoms, and the primary suspects at the root of a cure, beta-amyloid and tau, have been studied extensively with no resulting therapies.

Bio-Rad is a trademark of Bio-Rad Laboratories, Inc. in certain jurisdictions.All trademarks used herein are the property of their respective owner.